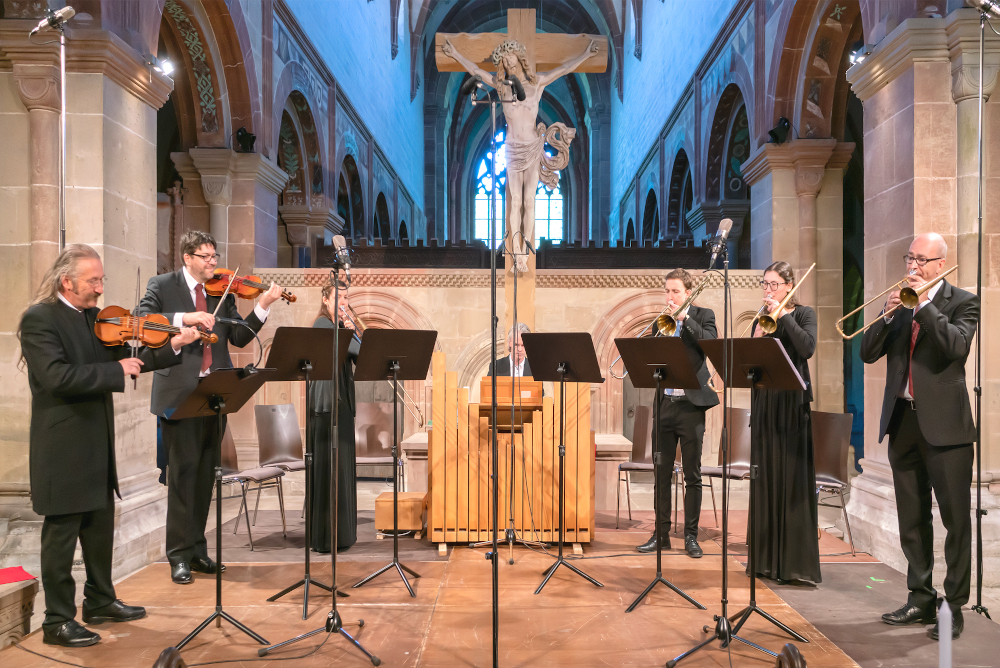 The Capricornus Ensemble Stuttgart is named after the Stuttgart court conductor Samuel Capricornus (1628 - 1665). The soloist ensemble, internationally cast under the direction of the Stuttgart trombone professor Henning Wiegräbe, has existed since 2009. It set itself the task of presenting musical treasures from the Renaissance and Baroque periods. Since 2014 the ensemble has found a musical home in Stuttgart with its own concert series. Here it is able to organize a wide variety of exciting concert programs. One of its main focuses is to embed the music of Stuttgart court composers such as Lechner, Capricornus or Boeddecker into an international context. To date, the Capricornus Ensemble has released three CDs on the Coviello Classics label.
The trombonist Henning Wiegräbe is a professor in the trombone class at the Musikhochschule Stuttgart. He studied in Hamburg, Karlsruhe and Trossingen with E. Wetz, W. Schrietter and C. Toet. He was strongly influenced by, among others, B. Slokar (Switzerland), C. Lindberg (Sweden) and B. Dickey (USA/Italy). Already during his time as principal trombonist with the Deutsche Staatsphilharmonie Rheinland-Pfalz he devoted himself more and more to early music. Since then he has performed with ensembles such as Concerto Palatino, Les Cornets Noirs, Cantus Cölln, Concerto Köln, Musica Fiata Köln, Orchestre des Champs-Elysées, Collegium Vocale Gent, Amsterdam Baroque Orchestra, Freiburg Baroque Orchestra, the Taverner Players and the Balthasar Neumann Ensemble and under conductors such as Konrad Junghänel, Philippe Herreweghe, Andrew Parrott, Ton Koopman, Pablo Heras-Casado and Thomas Hengelbrock. In Stuttgart he founded the Capricornus Ensemble Stuttgart. Besides his work as a soloist with orchestras such as the Bundesjugendorchester, the Deutsche Staatsphilharmonie Rheinland-Pfalz, the Dortmund Philharmonic, the Kurpfälzisches Kammerorchester or the Württembergisches Kammerorchester Heilbronn, he is an enthusiastic chamber musician. Partners include the Mandelring Quartet, the Vogler Quartet, the Verdi Quartet, the Peter Lehel Quartet, Daniel Schnyder, Martin Spangenberg, Wolfgang Bauer, Christian Lampert, Radovan Vlatkovic, City Brass and Bach, Blech & Blues. A special concern of Henning Wiegräbe is research into and expansion of the trombone repertoire. This ranges from discovering and performing unknown works from the Renaissance and Baroque periods to collaborating with contemporary composers and musical crossover artists such as Peter Lehel and Daniel Schnyder.