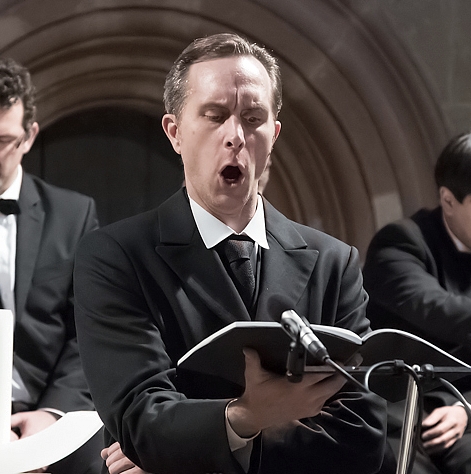 The German baritone studied voice at the Musikhochschule in Stuttgart under the guidance of Julia Hamari and Art Song interpretation under Konrad Richter. While a student, he debuted at the Wilhelma Theater in Stuttgart in the title role of Mozart's Don Giovanni. Prior to this, Mr. Hönisch studied in Karlsruhe and Lübeck, taking voice lessons from Roland Hermann and Franz-Josef Einhaus, in addition to conducting lessons and piano with Kaya Han. He has received further instruction in several master classes by such renowned singers and pianists as Gundula Janowitz, Brigitte Fassbaender, Catarina Ligendza, Edith Wiens, Francisco Araiza, Helmut Deutsch, Julius Drake, Malcom Martineau, Tom Krause, Rudolf Piernay, Wolfgang Schöne, Charles Spencer, Bernd Weikl and many other renowned artists. The 2011-2012 marked two significant debuts for Mr. Hönisch: in November, he performed in the world premier of Auerbach's Gogol at the Theater an der Wien, and made his debut at Amsterdam's prestigious Concertgebouw. During the 2010-2011 season baritone Falko Hönisch performed Bach's St. John's Passion in a staged production signed by Dale Duesing at the Reisopera in The Netherlands. In July 2010 he sang Hans Castorp, the leading role in the World Première of Gregory Vajdas' opera Der Zauberberg under the auspices of the Young Artists Music Festival in Davos, Switzerland. Falko Hönisch was member of the soloists ensemble at various theaters in Germany, where he sang many of the leading roles of his repertoire, including Count Almaviva in Mozart's Le Nozze di Figaro, Papageno and Sprecher in Die Zauberflöte, Gabriel von Eisenstein in Strauss' Die Fledermaus, Graf Eberbach in Lortzing's Der Wildschütz and Wolfram von Eschenbach in Wagner's Tannhäuser. The latter role marked his Italian debut at the Giuseppe Verdi Theater in Trieste during the 2009-2010 season. He has sung under the baton of numerous conductors including Frieder Bernius, Gregor Bühl, John Fiore, Siegfried Köhler, Cornelius Meister, Roberto Paternostro and Helmuth Rilling and with such orchestras as the Radio Orchestra of Munich, the Aalborg Symphoniorkester, the Symphony Orchestras of Düsseldorf and Bochum, the State Orchestra of Kassel, the Staatskapelle of Baden, the "Het Bravants" Orchestra in The Netherlands, the Limburg Symphony Orchestra, the Cologne Sinfonietta and the Bach Collegium Stuttgart. His repertoire includes the Bach's Passions, Haydn's Die Schöpfung (The Creation), and Brahms' German Requiem amongst many other titles. Mr. Hönisch has received numerous awards: he was a prize winner of the 2010 Lauritz Melchior International Singing Competition for Wagnerian voices; 2nd prize winner at the 2010 Mendelssohn Competition in Frankfurt; received the Audience Prize at the 6th International Wagnerian voices Competition in Karlsruhe; the 3rd prize and several special prizes at the 58th International ARD Competition in Munich (including the Audience Prize, the Prize for the Best Interpretation of the Mandatory Contemporary Composition and the Charlotte Hamel-Foundation Prize); in February 2009 he won the 1st prize at the Richard Strauss Competition in Munich, receiving the Richard Strauss Gold Medal during the Richard Strauss Festival in June 2009; at the 45th International Vocal Competition in 's-Hertogenbosch in 2008, he was awarded the Lied Prize; that same year he won a prize at the Robert Schumann Competition; he was also a prize winner at the 2007 Anneliese Rothenberger Competition. Mr. Hönisch has been the recipient of a grant from the Richard Wagner Association.