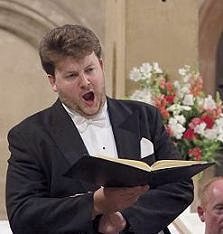 James Rutherford studied at the Royal College of Music and the National Opera Studio in London. In 2000, he was elected "New Generation Artist", a programme run by the BBC to support and provide awards for young artists. He has a very wide repertoire. He is equally comfortable with the Baroque operas of Handel (Rinaldo) and Bach oratorios as he is with Mozart (Le nozze di Figaro), Wagner (The Meistersinger), Verdi (Falstaff), Stravinsky und Benjamin Britten. His engagements have led him to the Paris Opera, the Welsh National Opera and, in London, to the Royal Opera House. He has sung with the Glyndebourne Touring Opera and appeared as a guest at the music festivals in Montpellier and Innsbruck. In Germany, he has sung "Rinaldo" with René Jacobs at the German State Opera in Berlin. Besides performing with famous English symphony orchestras, he has also appeared with the Berlin Philharmonic and the SWR Rundfunk Orchestra. In August 2006, James Rutherford won the first International Wagner Competition at the Seattle Opera.