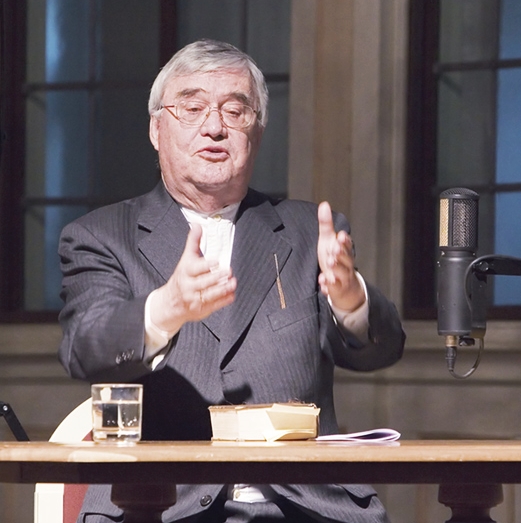 Born in Chemnitz (Germany) in 1933, Peter Härtling moved to the Swabian Nürtingen in 1946 after spending time in Saxony, Moravia and Austria. He started his journalistic work after school in 1952 at a small Swabian newspaper first, later then as literary editor at the 'Deutsche Zeitung' (German Newspaper) in Stuttgart and Cologne from 1955 till 1962. After that, from 1962 till 1970, he worked as co-publisher of the newspaper 'Der Monat' (The Month) in Berlin and started in 1967 as chief editor of the 'S. Fischer Verlag', where he was appointed managing director in 1973. Since 1974 Peter Härtling has worked as freelance writer. There are many awarded works among his published poems, essays, novels and short stories since 1953, that have been translated into more than twenty languages, for example the 'Deutscher Bücherpreis' (German Book Prize) 2003 or the 'Corine Ehrenpreis' (Corine Honored Award) 2007. Peter Härtling is particularly well known for his novel-biographies of great poets and musicians such as Friedrich Hölderlin, Franz Schubert, Robert Schumann, Wolfgang Amadeus Mozart and Fanny Hensel. In the years 2000 and 2001 he was president of the 'Hölderlin Gesellschaft' (Hölderlin Society). Peter Härtling died on 10 July 2017 at the age of 83 in Rüsselsheim near Frankfurt.