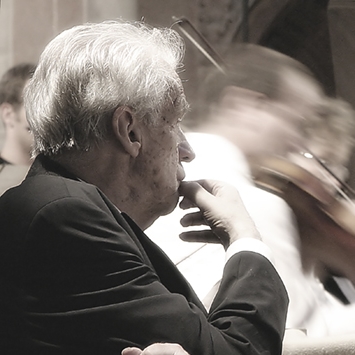 Walter Jens, born in 1923 in Hamburg (Germany), studied Classical Philology and Germanic studies; he attained his doctorate in Freiburg 1944 and habilated as professor in Tübingen in 1949. Up until his retirement from the professorship in 1988 he held there the only chair for General Rhetoric in the whole of Germany. From 1989 to 1997 he was president of the Academy of Arts in Berlin. He was awarded honorary doctorates by the universities of Athens, Augsburg, Jena and Stockholm and numerous awards for his publications, which now encompass 40 works. Walter Jens is the modern incorporation of that now rare breed, poeta doctus. In addition to his main fields of rhetoric, theology and literature he makes periodic excursions into the fiels of science, politics and essays. Nonetheless he still describes himself as having 'slim talent'. He no longer writes novels or dramas as he did at the beginning of his career, nor does he commentate as 'Momos', the TV critic of the Zeit. In one's old age, Jens maintains, one should 'try to hang around where one at the least has a hope of being ahead'. That is why he concentrated his work later on speeches, essays and imaginary dialogues between great minds as Lessing and Heine. Walter Jens died in Tübingen (Germany), 9 June 2013.