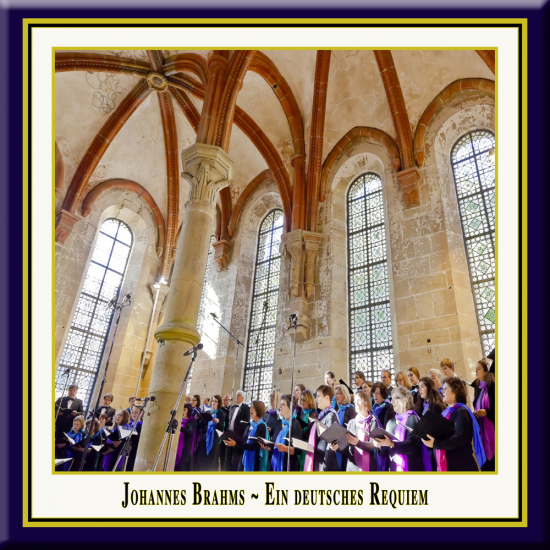 The "London Version" of "Ein deutsches Requiem" (sung in German)
for 2 soloists, choir and four-hand piano, arranged by the composer 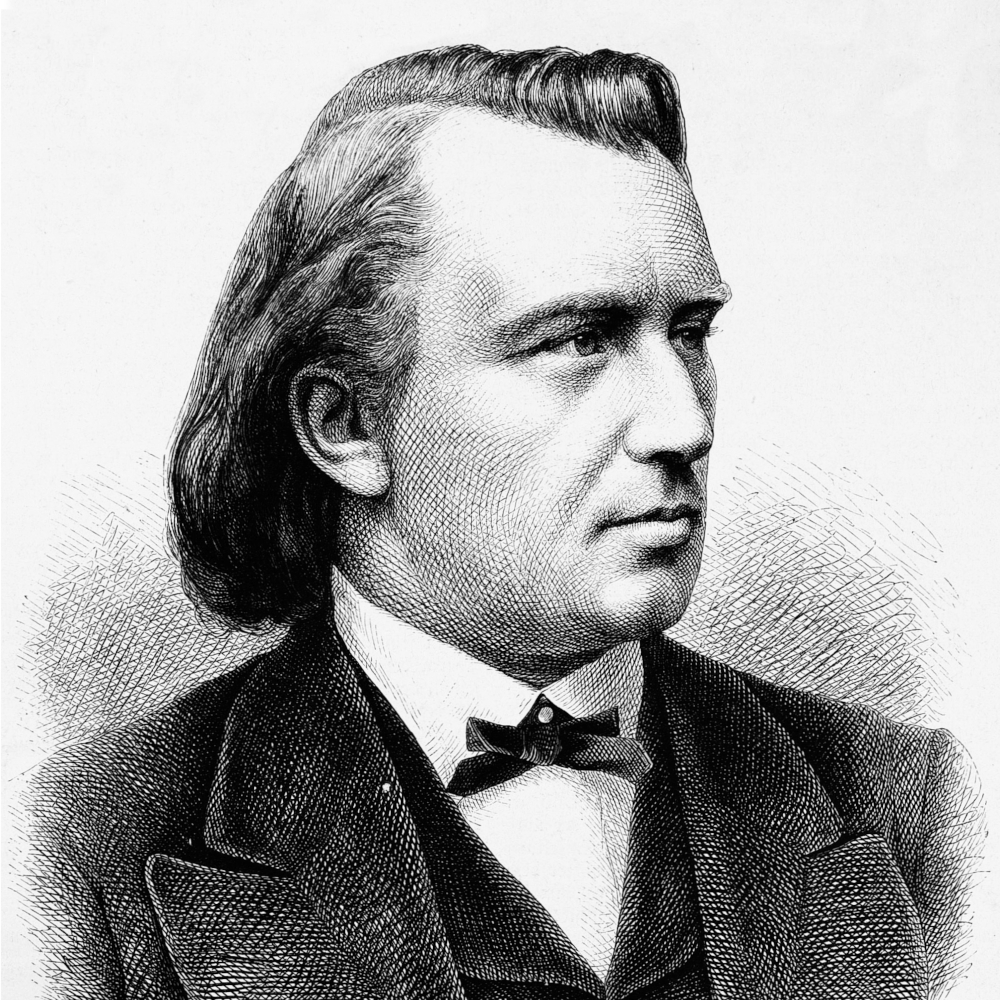 n Good Friday, April the 10th, 1868, the world premiere of the Requiem in a six movements version was given in Bremen, Germany. Brahms himself conducted the Choral Society of Bremen, having carefully been prepared by Karl Martin Reinthaler to perfom the new release. Friends of Brahms from all over Germany were attending this occasion. Clara Schumann noted in her diary: '... This requiem deeply moved me like no other sacred music... As I saw Johannes standing there with the baton in his hand, I always had to think of my dear Robert's prophecy - let him just take the magic wand, and let him operate with an orchestra and a choir - that is fulfilling today. The baton really transformed into a magic wand and vanquished Everybody, even his most determined enemies. This was such blissfulness for me, I haven't felt so delighted in years. After the performance was a supper at the Rathskeller, where everybody jubliated - it was a celebration of music.'
After the performance in Bremen, Brahms returned to Hamburg, where he finished the work by the addition of the movement. 'You now have sadness' that was finished in the autograph of the particell with 'Hamburg May 68'. In 1869 eventually, the complete opus was performed at the 18th of February in Leipzig under the direction of Karl Reinecke. Eduard Bernsdorf, the critic of the journal 'Signals of the musical world', who ten years earlier had called the piano concerto in d-minor a piece of 'bleakly waste and drought', nowhad no choice but to acknowledge in his critique on February the 22th, 1869: '... you so have to number the questionable work of Brahms among the most important doings having been accomplished by our younger and youngest generation of composers, as well as you have to designate it the most important of the Brahmsian creations. Above all, an aspiration for the Grand and Noble does announce itself here and, coherring, the complete negation of the Ordinary and Banal...'
Johannes Brahms himself produced a four-handed version of his German Requiem for piano that was publicized first in London in 1871. The publication of simplified musical versions for piano duo was common in the 19th century, being in some respects the precursor of acoustical recording because it allowed musical amateurs to experience great works outside the concert hall by their own performance on the piano. Brahms worked on this version himself, i.a. out of the conviction that if it really had to happen, he would be the best candidate for this duty.
All in all, he considered this work as unworthy, but necessary, thus he refused noting his name as arranger on the front page, and as it happened anyhow, he ordered the exemples already printed to be recollected and added with new front pages not naming him as arranger any longer. In a letter Brahms stated ironically: 'I dedicated myself to the noble occupation of rendering my immortal creation enjoyable also for the four-handed soul. Now it can't decline.'.
Even if it obviously didn't answered the Maestro's basic idea, the piano version gives considerably more room for dynamics and therefore serves the tension of the work. Prior condition is a choir and a conductor that see an opportunity and even are challengend by the minimalism of the instrumentation in filling these deep moments with all the tension human voice is capable of. The vocal performance is enriched by the convertion of the piano version by Brahms himself, because he in person decided on the atmospheric form of his presentation. It is quite exciting to hear the chamber choir merge into word and work and having the courage of dedicating itself to the Requiem's spirit.

Heidi Elisabeth Meier (Soprano)
Heidi Elisabeth Meier is considered an exceptional phenomenon among up-and-coming soloists and can already look back on numerous successes in concerts, operas and song. The soprano, who was a member of the Bayerische Singakademie from an early age and completed her studies with honours under Adalbert Kraus at the academy of music in Munich, has performed in concert with the Münchener Symphoniker under Prof. Schneidt, the Münchener Bach-Chor under Christian Kabitz, the Deutsches Sinfonieorchester Berlin under Kent Nagano and the Ensemble für neue Musik. In 2003 she debuted at the Gärtnerplatz Theatre and elsewhere.

Josef Wagner (Baritone)
The musical education of the Austrian Bass-Baritone Josef Wagner, born in 1975, began with a membership in a boys' choir and with violin and piano lessons. Later he studied singing at the University of Music and Dramatic Arts in Vienna, where he was inspired by Paul Esswood, Walter Berry and Christa Ludwig. His current teacher is the tenor Wicus Slabbert. After the debut with "Don Alfonso" ("Così fan tutte" and Dulcamara ("Elisir d'amore") Josef Wagner became a member of the Vienna Volksoper in 2002. His repertoire includes "Figaro" in "Le nozze di Figaro", "Don Alfonso" and "Guglielmo" in "Cosi fan tutte", "Masetto" in "Don Giovanni", "Papageno" in "Die Zauberflöte" (Mozart), "Dulcamara" in "L'elisir d'amore" (Donizetti), "Publio" in "La clemenza di Tito" (Mozart), "Alidoro" in "La Cenerentola" (Rossini), "Colline" in "La boheme" (Puccini), "Philebos" in "Der König Kandaules" (Zemlinsky), "Fra Melitone" in "La forza del destino" (Verdi) and other roles. He performs at the Salzburg Festival, the Vienna Volksoper and the opera houses of Bern, Geneva, Ireland and Japan. At the Israeli Opera he sang Lord Sidney in Il viaggio a Reims (Rossini). In addition to his career as an opera singer Josef Wagner also performes as a concert singer. Thus he gave concerts under the conductors Ton Koopman, Dennis Russell Davies and Nikolaus Harnoncourt in Vienna's Musikverein and the Vienna Konzerthaus.

GrauSchumacher ~ Piano Duo
Andreas Grau & Götz Schumacher
Andreas Grau and Götz Schumacher, with their talent for putting together clever and innovative programs, have established themselves as one of the world's top piano duos. Their cooperation at the piano is evidence that the two expert pianists are nothing short of musical soul mates. The vast breadth of the duo's expressiveness has garnered it invitations to various festivals and concert halls, such as the Kölner Philharmonie, Berliner Philharmonie, Cité de la Musique Paris, Schwetzinger Festspiele, Salzburger Festspiele, Tonhalle Zürich, and the Piano Festival La Roque d'Anthéron, and has resulted in collaborations with renowned conductors such as Michael Gielen, Lothar Zagrosek, Emanuel Krivine, Heinz Holliger, Kent Nagano, Bertrand de Billy, Andrej Boreyko, Georges Prêtre, and Zubin Mehta. The pair's most recent projects have included concerts with the Deutsches Symphonie-Orchester, Konzerthausorchester Berlin, Stuttgart Radio Symphony Orchestra, Bavarian State Orchestra, Vienna Radio Symphony Orchestra, and the Orchestre National de Lyon, as well as performances at the Lucerne Festival, the Wiener Konzerthaus, and the Concertgebouw Brugge. Their keen ability to conceive well-considered program concepts is also evident in their recordings. Their album of Stockhausen's Mantra won awards from Le monde de la musique and Diapason. Gramophone selected their CD Visions de l'Amen, featuring works by Messiaen and Schütz/Kurtág, as Editor's Choice.

Jürgen Budday ~ Conductor & Music Director
Jürgen Budday (born 1948) is conductor, director of church music, music teacher and artistic director of the concert series at the UNESCO World Heritage Site Maulbronn Abbey. He started teaching at the Evangelical Seminar in Maulbronn in 1979. This also involved his taking over as artistic director of the Maulbronn Monastery Concerts and the cantor choir. He studied church music and musicology at the Academy of Music in Stuttgart from 1967 to 1974. In 1992, he was named Director of Studies, in 1995 came the appointment as Director of Church Music and in 1998 he was honored with the "Bundesverdienstkreuz" (German Cross of Merit) as well as the Bruno-Frey Prize from the State Academy in Ochsenhausen for his work in music education. In 1983 Jürgen Budday founded the Maulbronn Chamber Choir (Maulbronner Kammerchor) with whom he won numerous national and international awards. At the Prague International Choir Festival, for example, Jürgen Budday received an award as best director. Since 2002, he has also held the chair of the Choral Committee of the German Music Council and became director and jury chairman of the "German Choir Competition" (Deutscher Chorwettbewerb). In 2008, he received the silver Johannes-Brenz-Medal, the highest honoring of the Evangelical-Lutheran Church in Wuerttemberg. For his achievements as a conductor, as educator and as musical ambassador of the country, Jürgen Budday was honoured in 2011 with the honorary title "Professor".
Jürgen Budday has started a cycle of Handel oratorios that is planned to span several years, which involves working with soloists like Emma Kirkby, Nancy Argenta, Miriam Allan, Michael Chance and Mark Le Brocq (to name but a few). The live recordings of these performances, that have received the highest praise from reviewers, has won him international recognition. Till these days 10 oratorios by G.F.Handel are documented on discs.
"No conductor and no choir have so consistently recorded so many Handel oratorios as Jürgen Budday and his Maulbronn Chamber Choir" (Dr. Karl Georg Berg, Handel Memoranda Halle 2008).

Fine Reduction and Fine Performance
Brahms' own piano reduction of his Requiem. It works wonderfully in this format and this recording is magnificently performed and recorded. This will not replace the orchestra version (and certainly was not meant to) but it allows one to hear the work in a new way...

Item getting today, 04/13/17. A very interesting interpretation of the famous Brahms German Requiem for piano duo, choir and soloists; the London version, in contrary to the later full orchestral, choir and soloists version. This chamber version makes this work more a delightful and receptable one during this Passion Time.