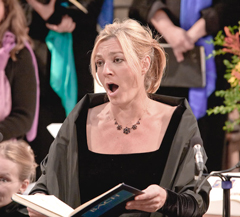 The German mezzo-soprano Ursula Eittinger studied singing at the Detmold Music Academy, where she was awarded a concert and opera diploma with distinction in 1990. While she was still a student she took part in various master courses, for example with Sena Jurinac, Kurt Widmer and Charles Brett. Ursula Eittinger has worked with ensembles like the WDR Radio Orchestra, the Hannover and Hamburg Radio Orchestras, the Bach-Collegium Stuttgart under Helmuth Rilling and the Munich Bach Soloists. Concert tours have taken her to the Royal Albert Hall in London, to Barcelona (Palau de la Musica) and many festivals such as the BBC Prom Concerts, the Schleswig-Holstein Festival and the Cracow International Festival for Old Music. The variety which characterises he repertoire shows clearly in her television, radio and CD recordings (for example Schumann duets with Scot Weir), also in a duet programme with Barbara Schlick.