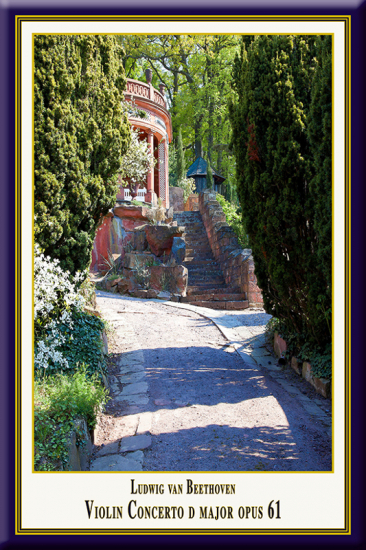 Art Movie by Josef-Stefan Kindler
after and with Ludwig van Beethoven's
Concerto for Violin & Orchestra in D Major Op. 61,
performed live by Mila Georgieva (Violin)
and the New Symphony Orchestra Sofia
at the National Palace of Culture in Sofia (Bulgaria)
Conductor: Rossen Milanov

he Violin Concerto in D major, Op. 61, was written by Ludwig van Beethoven in 1806. Its first performance by Franz Clement was unsuccessful and for some decades the work languished in obscurity, until revived in 1844 by the then 12-year-old violinist Joseph Joachim with the orchestra of the London Philharmonic Society conducted by Felix Mendelssohn. Since then it has become one of the best-known violin concertos, considered by Joachim himself to be the 'greatest' German violin concerto.
Beethoven had previously written a number of pieces for violin and orchestra. At some point in 1790–2, before his musical maturity, he began a Violin Concerto in C, of which only a fragment of the first movement survives. Whether the work, or even the first movement, had ever been completed is not known. In any event, it was neither performed nor published. Later in the 1790s, Beethoven had completed two Romances for violin – first the Romance in F and later the Romance in G.
These works show a strong influence from the French school of violin playing, exemplified by violinists such as Giovanni Battista Viotti, Pierre Rode and Rodolphe Kreutzer. The two Romances, for instance, are in a similar style to slow movements of concerti by Viotti. This influence can also be seen in the D major Concerto; the 'martial' opening with the beat of the timpani follows the style of French music at the time, while the prevalence of figures in broken sixths and broken octaves closely resembles elements of compositions by Kreutzer and Viotti.
Beethoven wrote the concerto for his colleague Franz Clement, a leading violinist of the day, who had earlier given him helpful advice on his opera Fidelio. The work was premiered on 23 December 1806 in the Theater an der Wien in Vienna, the occasion being a benefit concert for Clement. The first printed edition (1808) was dedicated to Stephan von Breuning.
It is believed that Beethoven finished the solo part so late that Clement had to sight-read part of his performance. Perhaps to express his annoyance, or to show what he could do when he had time to prepare, Clement is said to have interrupted the concerto between the first and second movements with a solo composition of his own, played on one string of the violin held upside down; however, other sources claim that he did play such a piece but only at the end of the performance.
The premiere was not a success, and the concerto was little performed in the following decades.
The work was revived in 1844, well after Beethoven's death, with a performance by the then 12-year-old violinist Joseph Joachim with the orchestra of the London Philharmonic Society conducted by Felix Mendelssohn. Ever since, it has been one of the most important works of the violin concerto repertoire, and is frequently performed and recorded today...
[From Wikipedia, the free encyclopedia]

The most beautiful performance of this work

Overall this is the most beautiful performance of this most beautiful work.
It's a shame that there are so few recordings of this Bulgarian violinist.﻿﻿.﻿.

A conquest of hearts performance

This performance conquest the hearts!

It sounds so beautiful

The most beautiful performance of this work

Overall this is the most beautiful performance of this most beautiful work.
It's a shame that there are so few recordings of this Bulgarian violinist.﻿﻿.﻿.
Listener3 on YouTube

A conquest of hearts performance

It sounds so beautiful